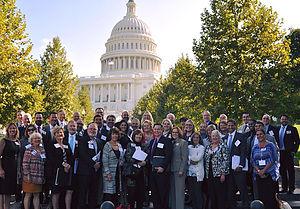 On September 27, 2017, Ursula and Todd were part of a CAI delegation that visited Capitol Hill to discuss community association issues with federal legislators.  The delegation consisting of CAI members from 16 states visited more than 70 offices to encourage members of Congress to support fairness in disastor recovery by sponsoring H.R. 3238 and also to discuss housing finance reform.

On October 27, 2017, Todd conducted a case study presentation on legal issues for PCAM manager candidates on behalf of CAI.

On November 4, 2017, the Washington D.C. Metropolitan Chapter of CAIpresented Leslie with the Rising Star Award for serving on the editorial committee for Quorum Magazine, the chapter's monthly publication.

We congratulate our attorneys for their efforts!